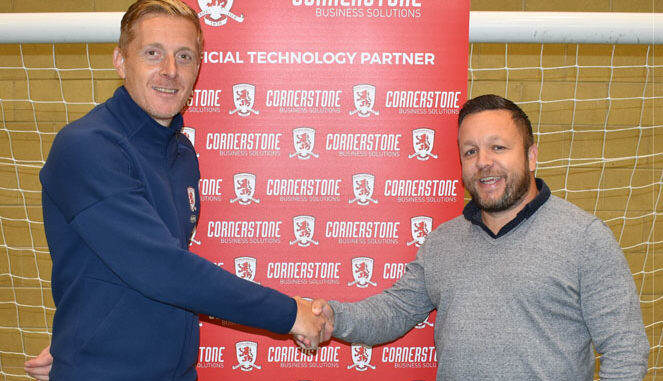 Teesside IT leaders Cornerstone Business Solutions have strengthened their links with Middlesbrough Football Club by becoming the Championship side’s new Shorts Sponsors, in a move that is a first for Boro.

As part of the deal, the logo of the Stockton-based business IT firm will appear at the base of the back of all home and away shorts worn by Boro’s first team squad during the 2016-17 Championship season.

Lee Fryett, Middlesbrough FC’s head of partnerships, said: “Although shorts sponsorships have been in place elsewhere this is a first for the club.

“We had a lot of interest in sponsoring the shorts but we’re delighted that Cornerstone’s name will appear on our kit as the firm has been a loyal partner and supporter of the club for many years.

“It’s very fitting that Cornerstone should join Ramsdens and Durham Tees Valley Airport as the club’s kit sponsors, as all three are passionate and ambitious local brands.”

Cornerstone managing director Chris Petty, a lifelong Middlesbrough supporter pictured above (right) with Boro boss Garry Monk, said: “It’s a fantastic buzz for everyone at Cornerstone to be sponsoring part of the Boro kit.

“As a Teesside firm that’s focused on supporting local businesses, you’ve got to be excited to see your brand on the Boro kit. What better way to celebrate your Boro support?

“We have a close and long-term working relationship with the football club and this naturally strengthens our partnership in a very tangible way.

“We’re a fast-growing business who – just like the Boro – have big ambitions for the next 12 months. We’re really going for it on the back of new contract wins and this will certainly get our name out there.

“I’m very confident they’ll be promoted this season so this type of opportunity won’t realistically be there once Boro are back in the Premier League, so we’re delighted to be on board.”

Cornerstone ensured the new Boro coaching team have all the Apple technology they need at their fingertips as the club looks to bounce back to the Premier League at the first attempt following last season’s relegation.

Petty added: “The use of technology is ever increasing within the professional game in terms of the backroom staff working with it to prepare and inform the players ahead of each game.

“All of the club’s IT equipment – both at the Rockliffe Park training HQ and in the commercial operations at the Riverside Stadium – has been supplied by Cornerstone.

“It’s great to know the equipment we’ve supplied is being used by Garry Monk and his team. We’re hoping to play our own small part in helping Boro bounce back by winning promotion this season, whilst also helping the business side of the club continue to thrive.”

Last summer Cornerstone further strengthened its bond with its flagship client by carrying out a major contract to upgrade the Riverside Stadium’s cabling and increase internet speeds including the installation of high-quality CAT6 cabling to the refurbished media facilities, corporate suites, office locations and kitchens.

Cornerstone’s IT engineering department have also been providing critical support at the Riverside Stadium on match days.

The partnership means Cornerstone also sponsor the club’s Technology Zone within the Riverside Stadium’s popular East Stand Family Zone, featuring arcade machines and giving young fans the chance to take on members of the Boro first team squad at FIFA 17 on a large screen within the concourse.