When the Linked-In profile for the boss of one of Teesside’s leading IT firms says his interest are ‘Football, Going to the Gym, Drinking/Socialising’ you know it will be an interesting chat. Mike Hughes went to Stockton to meet Chris Petty, MD of Cornerstone Business Solutions and the man behind the Skylive Airshow.

What sort of businessman are you?

One of the worst things I find in business is that here are dodgy people out there who will take you for a few quid and aren’t bothered about it.

I make deals and I am a man of my word, but there are too many people who don’t do that, and that winds me up and frustrates me.

Did you get on well at school?

I had left Ian Ramsay school with no exams after being kicked out because I was a bit of a wrong ‘un.

I just had no interest and I had my mind set on joining the army so couldn’t see the point in exams and in the lead-up to that I disappeared from school for about six months and had to be taken there in the end. During that time I sold ladies’ shavers – I used to demonstrate them on my own legs for the girls at school!

But I was finally kicked out of school for fighting – my dad had sent me to boxing early on – and they told my mum I would either be a multi-millionaire or in prison.

I went straight from school into the Green Howards, but I crushed my knees – I’m only a little fella and the backpacks I was carrying were quite big and hefty and with running eight or nine miles I ground them down and had to have two or three years of physiotherapy.

I also sold cigarettes and even in the army I was using money I had earned from that, and from a fencing job and from selling my mum’s cakes – to pay people to do my work for me like cleaning my boots or doing my bed. 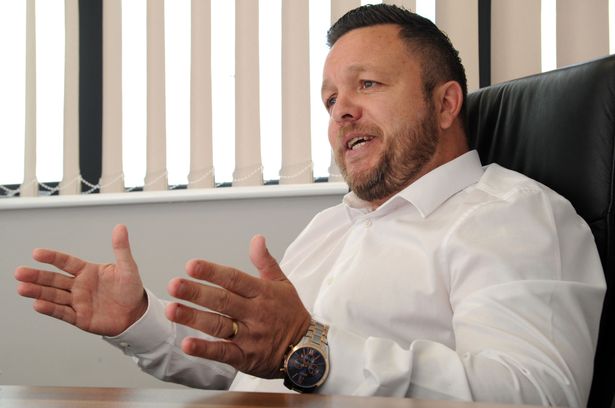 I can see looking back that was me starting to be an entrepreneur.

But I am like a child who can never sit down and just read a book, so I became bored and left the army rather than stick around and wait for any possible compensation and joined the TA.

I then got into construction and blagged my way into becoming a civil engineer and was helping build Holme House Prison – rather than being in it – and then the Darlington Building Society HQ at Morton Park.

But I was in a site office one terrible winter’s day and someone pulled up in a Mondeo and he turned out to be a sales rep for the builder’s merchants. I thought that looked cushty so I fancied getting into sales and quickly realised that I would have to work my way up.

First, I sold frozen gourmet food door to door and was in a little van with £20 boxes of this food, then Kirby vacuum cleaners and textured wall coatings.

How did you move into IT?

Eventually I got into computing even though back then I didn’t know how to turn one on. But it was a Government-backed scheme so people were snapping my hand off for them for about £500 a day.

This was about 15-odd years ago and I soon started selling Sage software and became the top sales person. Those sales lessons have stick now and I know you have to sell yourself first and if people don’t like you, it doesn’t matter what you are selling. You need a reputable company to work for and a product that you believe in.

Has business changed you?

Because of my anxiety levels I see a therapist now and we realised that I still see myself as Chris Petty when he was 18, because that is what I am and the kids and my missus keep me grounded and away from the ‘mini’ celebrity side of things!

I love my job – my life is business – and I love Teesside, with lots of entertaining and friendships and relationships that go with it. I always have to have the salesman’s head on, even when we are on the wine and Champagne at the Boro.

Is Boro a big part of your life?

We have a box there and are now their official technology partner as well as doing the IT at Rockliffe.

Boro is huge for me – we know everybody there so it takes us half an hour just to get in! I will have had 35 conversations even before I’ve sat down and then I don’t get to eat my dinner.

When they were promoted it was the worst day of my life because I wanted them to go up, but if they went to the play-offs they would have been on the same day as the air show and no-one would have turned up at the airport.

On the day I was shaking so much I had to use my other hand to lift my glass up to my mouth to have a drink.

How did the airshow become a Chris Petty project?

I saw on Facebook that they were looking for investors, so I looked at the business plan for them, but it got cancelled early on. But my mindset has always been that some of the events I had been to were just boring, so with the experience of the Cornerstone ball and the Finlay Cooper ball I had enjoyed running, I took the motto of ‘Bigger and Better’ for the airshow as well.

It was a nightmare at first, because everything fell out of the sky that year with several terrible accidents meaning we had to re-schedule, which led to a load of conspiracy theories that it would never happen. But to bring something back after 26 years, it has to be right, with a wow factor and long-term deal.

The run-up was a real buzz,and I can still remember a bloke on the phone saying ‘Is that Chris Petty? This is Red Ten from the Red Arrows’ and that was when I knew we would get them.

On the day – the craziest of my life – it was huge with about 15,000 people there and within three days we had said we would be doing the next one.